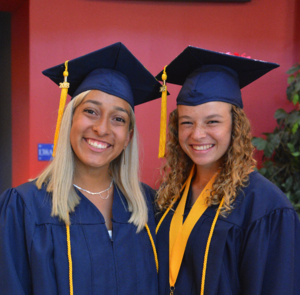 The Texas School for the Deaf (TSD) graduates a record number of seniors in the school’s recent history. Click here to see the Photo Gallery or watch the Graduation Ceremony (video). 70 TSD graduates received diplomas during commencement exercises at Texas School for the Deaf.

TSD celebrates a year of academic achievements with a record number of dual credit course offerings for high school students in collaboration with Austin Community College. TSD also celebrates the Performing Arts Program’s success at the box office with the 2018 high school production of NOISES OFF!

At TSD since 2001 when she enrolled as an infant, 2018 TSD Valedictorian, Jaelene Etkie, bleeds Ranger blue. Etkie’s mom is a tenured teacher at TSD, her father a teacher and coach at TSD, and her older two siblings are both TSD graduates. Etkie’s younger sibling is now a sophomore at TSD.

Salutatorian, Kimberly Gonzalez - from Grapevine - enrolled at TSD in high school, in 2014.

Both graduating seniors have been active members of the Junior National Association of the Deaf and involved in school sports. Etkie and Gonzalez have both been accepted to Gallaudet University and will attend the world’s only liberal arts university designed for deaf and hard of hearing students, in Washington, D.C.

Claire Bugen, TSD Superintendent says, “TSD graduations are like no other. We’ve watched many of these children grow up here on the TSD campus and others who arrived later in life in search of a better education. There are 70 special stories in this class - each a unique journey.”