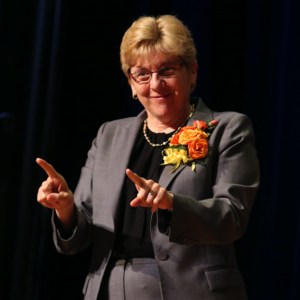 In 2016, Roberta J. Cordano was inaugurated as the first deaf female president of world’s only liberal arts university for deaf and hard of hearing students – Gallaudet University (GU) in Washington, D.C.

Following the invocation performed by Texas School for the Deaf”s (TSD) 2017 Kindergarten class, and joined by 2017 graduates who have been enrolled at TSD since Kindergarten, Gallaudet University President, Roberta J. Cordano, delivered the commencement address to 58 seniors of TSD’s Class of 2017 on June 1, 2017.

74% of TSD’s Class of 2017 will be attending community colleges and universities, including The University of Texas-Austin, Gallaudet University, The Rochester Institute of Technology, Austin Community College and Texas State Technical College.

From more than 28 different Texas cities, at least half of these graduates have resided at TSD for the duration of their primary and secondary years, leaving their homes and families to obtain a quality education.

With home going each weekend so families remain connected, TSD students also have a “home” at the Austin campus where deaf peers and deaf role models surround them, meaning complete access to language and communication in American Sign Language (ASL) and English. 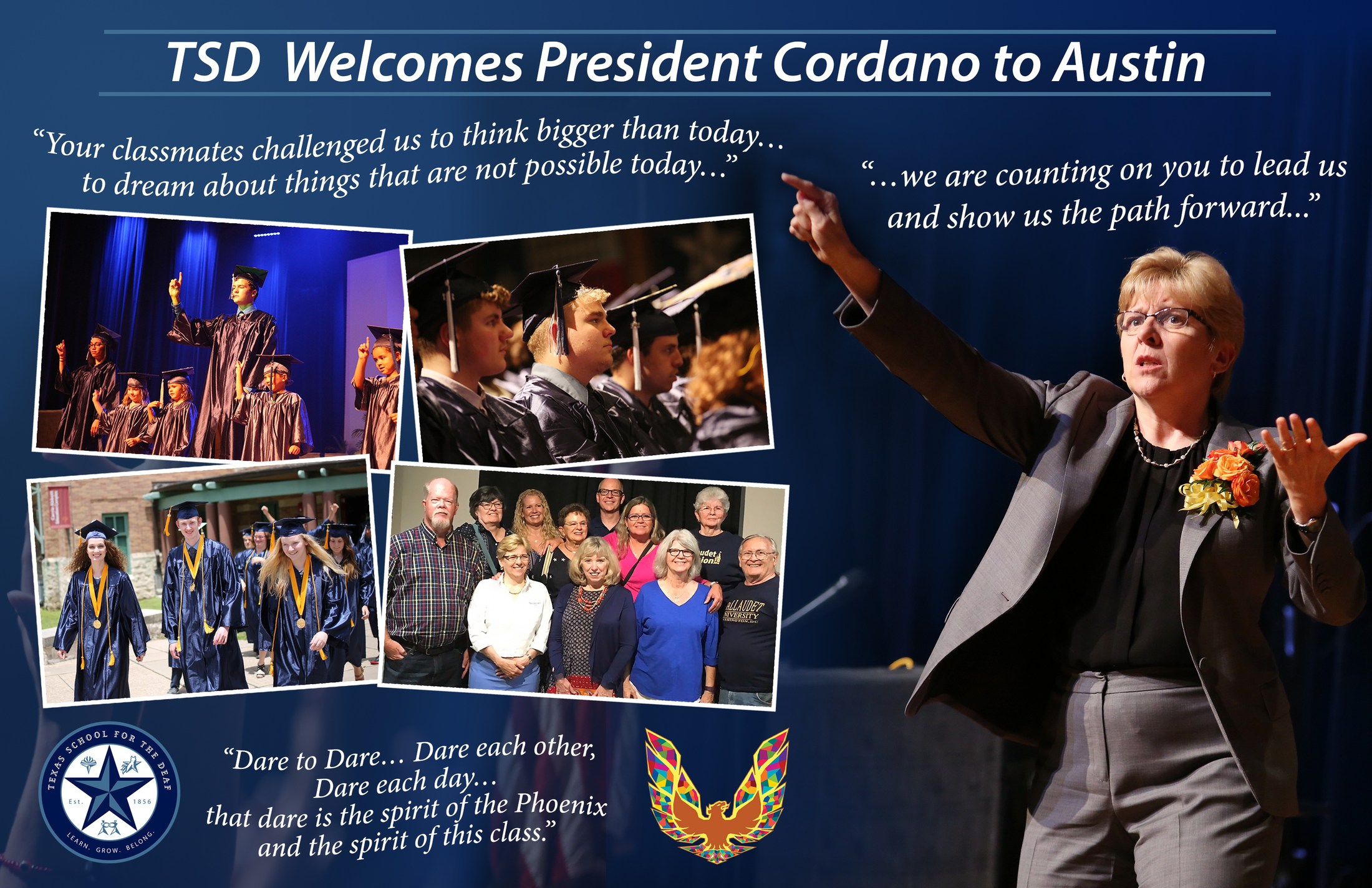 Thrilled to welcome Cordano to Texas and introduce her to the Austin community and the TSD graduating class of 2017, TSD Superintendent, Claire Bugen, says “students who are deaf, including our TSD Class of 2017 seniors, look to deaf adults, like Cordano - who has achieved great success in her career and her life - as a beacon of hope for their future.”

In 2016, Cordano was inaugurated as the first deaf female president of world’s only liberal arts university for deaf and hard of hearing students – Gallaudet University (GU) in Washington, D.C.

Bugen says, ”Cordano was the right person, for the right job, at the right time in the (Gallaudet) university’s history.” Bugen co-chaired the selection committee that recommended Cordano’s hiring.

Recalling Cordano’s inauguration message, Bugen says it “was powerful and brought a sense of unity and hope to the (Gallaudet) campus community.”

Since taking GU’s top post, Cordano is leading the university’s transformation with large increases in enrollment, expansion of boundaries on research in language and technology, and long term redevelopment of the 153 year old campus corridor which she envisions as a future ASL tourist destination and site for exhibiting exciting university innovation.

Cordano was most recently vice president of program for the Amherst H. Wilder Foundation in Saint Paul, Minnesota, where she was responsible for direct community-based programs to nearly 9,500 people in the areas of early childhood, community mental health, family supportive housing, aging and caregiver services, school reform, and food access.

A community event for President Cordano was held at the Austin Deaf Club on May 30, and a private fundraiser for GU was hosted at the home of the TSD Superintendent who is currently vice-chair on the Gallaudet University board of trustees.