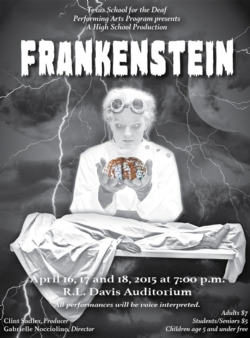 A retelling of one of the earliest writings of science fiction – TSD’s own story of Frankenstein, on stage, at the school’s R.L. Davis Auditorium, for three shows at 7:00 p.m., this Thursday, Friday and Saturday, April 16-18, 2015.
Austin, Texas – April 16, 2015 – The Texas School for the Deaf’s (TSD) Performing Arts Program invites you to the second annual high school theatre production – at the school’s R.L. Davis Auditorium, for three shows at 7:00 p.m., this Thursday, Friday and Saturday, April 16-18, 2015.
Second-year theater arts student, TSD junior, Jasi Kennedy, debuts in her leading role as Dr. Victor Frankenstein.
In Kennedy’s native language – American Sign Language (ASL) - though not a written language, using ASL requires speaking publicly all the time. However, Kennedy says she is just finding her pace performing on stage before such a large audience.
“Last year, Kennedy says, in a supporting role playing Cinderella’s stepmother, was really when I discovered how to adapt my personality to the character and make it my own.
It was then that I discovered my ‘home’ on stage, where I can be myself and not feel judged.”
Senior, Nicholas Holton, agrees. Now in his fourth year in theatre arts, this is his fifth stage role, and also his first time in a lead role.
With attention to the tiniest of details, Holton puts his own spin into his character, playing the role of Frankenstein’s lab-created Creature – a grotesque but sentiment being brought to life as the doctor’s scientific experiment and culmination of years of research in his quest to discover the secret to life.
“Not only have I become more self-confident, but I have discovered my own ‘safe haven’ on the stage.”
Kennedy, a female, says playing the role of a male character, has also pushed her to stretch her talents, and found unexpected inspiration in the work of the author who wrote the story of Frankenstein, Mary Shelley.
Shelley first published her work anonymously back in the early 1800’s. Then, when she later revealed her identity as the author, she also began a life advocating for the rights of other women.
Kennedy imagines Shelley might be excited to see a woman in the role of Frankenstein, and is honored to bring the character to life on TSD’s stage.
“I hope to inspire other kids, especially girls, to push their own boundaries and try new things like I’ve done, she says.
I want to others to see their gifts and talents come alive like I feel mine do every single time I am on stage.”


ABOUT THE TEXAS SCHOOL FOR THE DEAF (TSD)
The Texas School for the Deaf is the oldest continuously operating public school in Texas. Educating students of Texas who are deaf and hard of hearing since 1856, the campus also provides outreach and educational resources for students, their families and professionals in the field throughout the state of Texas. With educational excellence and a strong belief in a culture and community at TSD, students form a unique identity based on their individual strengths and talents. TSD is an environment where students learn, grow, and belong. For more information, visit www.tsd.state.tx.us.