TSD’s Blue Chargerbots finished in 4th Place out of 23 teams! 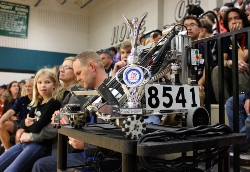 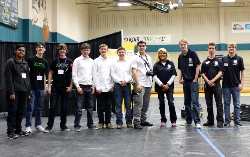 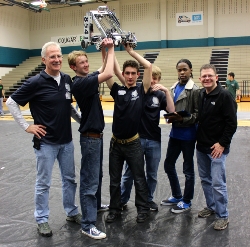 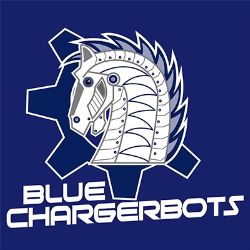 TSD’s Blue Chargerbots finished in 4th Place out of 23 teams to earn a spot in the Alamo Regional FTC Games in San Antonio February 20- 21, 2015.

What an exciting day AND even more exciting night!  The day began before 8:00am and ended after 10:30pm but Blue Chargerbots were victorious and had an amazing finish to a very challenging day.  THIS is why we have all worked SOOOOO hard….Because this team has heart and never gave up!
Here is a brief summary of how the first 5 matches of the day went for our team:
Match 1 - We were 'randomly' paired as an alliance with another Rookie team to compete against 2 other very high ranking teams.  Seconds after the match began, our alliance's robot 'died on the field', leaving it lifeless and blocking all 3 of our scoring tubes preventing us from being able to access and drop balls into any of our tubes.  OUCH!  But our team did not panic and they managed to find a way to score 56 points in the match by knocking over the kick stand and getting their robot back up on the ramp.  While it was a very challenging match is was a great lesson in patience and perseverance.
Match 2 - Again, we were randomly paired with another Rookie team to compete against two other very good teams.  Again, the other team was of NO help to us as an alliance in scoring points.  The judges disqualified our partner BEFORE the match even started because of a height violation on their robot.  Reall!y!?!  We were in shock and disbelief because once again it was our ONE robot competing against 2 other VERY good robots.  But the guys did the best they could and had a very respectable score (140 points, I think).
Match 3 - By this time we were a little discouraged but we knew we had 3 MORE matches and we must have an EXCELLENT game to make-up a lot of points for ANY chance at ALL of qualifying for the Regional Competition.  Unbelievable…..but after knocking out the kickstand to release all the balls to the floor…..the balls did not drop!  What!!  How does this happen?  We continue to ram into the ball holder to release the balls and the door does not open.  At this point, we are thinking this match will have to be replayed due to equipment error because after knocking out the stick the balls always drop.  But they did not!  There were no balls on the floor and time was running out so our team pulled 2 empty tubes and our robot back up the ramp to score 90 points.  Ugh…..This was NOT the match or the score we needed.  Of course the other teams did not score much either but we were not able to make-up any ground.
After the 1st 3 matches we were in 21st place out of 23 teams.  Our team was feeling really ‘unlucky’ to say the least.  We even attempted to ‘challenge’ some of the events that had happened.  The ‘challenge process' was a GREAT experience and Gabriel did an AWESOME job of explaining to the judges why we felt that we had ‘grounds’ for a challenge.  The judges listened to him but denied our challenge stating: “Even though it is very unfortunate, it is ALL part of the game!”  Ugh!  ANOTHER defeat!
Match 4 and Match 5 - Awesome!  That is all I can say to describe it!  They had their BEST 2 matches of the SEASON.  They never gave-up.  The scored a lot of points ending our 5 matches with a total of over 640 points.  But is was NOT enough to finish in the TOP 8 places needed to qualify for Regionals.
-----------------------------------------------------------
BUT it was NOT over!!!!  We were selected to be part of a 3-team Alliance with two of the Top 4 teams in the total rankings,  (Connally's ‘Chrome' and Austin Robotics Club).  What an AWESOME opportunity.  Both of these teams recognized that our 22nd place ranking did not reflect the talent, capability, and heart and soul of our team.  They asked us to partner-up and form a 3-team alliance for the final 6 matches.
Guess what!!  Our 3-team Alliance:  TSD’s Blue Chargerbots, Connally’s Chrome, and the Austin Robotic Club WON 1st Place in the competition.  Yep….1st Place Alliance Team - (trophy and ALL)  AND we also won 2nd place in the Rockwell Collins Innovate Award.  GREAT DAY!!
By being selected to participate in the last 6 matches, TSD’s Blue Chargerbots finished the day in 4th place overall winning us a SPOT in the Regional Competition in San Antonio Feb 21-22.