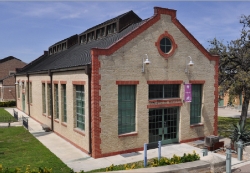 Texas School for the Deaf's Heritage Center and Museum flaunts honors & unveils history of achievements by HOME STATE ATHLETES at International DEAFLYMPICS. The exhibition is now extended until June 6, 2014.

New Date of the Closing of the Special Exhibition

At the Heritage Center at Texas School for the Deaf

The “Deaflympics and TSD People” exhibition is now extended

Texas School for the Deaf

We proudly present this exhibition to recognize and honor our amazing former and present TSD students and staff who have participated in the Deaflympics games as athletes, coaches, and even officials.

The exhibits in the back room feature memorabilia of the Deaflympians from 1957 to 2013. They include medals, uniforms, banners, etc.  The other exhibit in the front right corner of the museum focuses on our TSD icon Ruth Seeger, the only woman on the first USA track and field team in 1957 and five-time USA Women’s track and field coach from 1965 to 1989.

In 1957, the first USA team was sent to the International Games for the Deaf in Rome, Italy.  Three people from TSD on the USA track and field team were Raymond Butler, Athletic Director, Ruth Seeger, a PE teacher, and Sammy Oates, a 1958 graduate.

Since 1957, TSD people were at every game. As of now, the total of medals earned by both former and present students and staff is 109.

Last July at the 2013 Deaflympics held at Sofia, Bulgaria, three TSD students earned six medals. One of them is now a senior at TSD. It is believed that TSD has the most medals among the other schools for the deaf at this Deaflympics. All together there were 10 people from TSD as athletes and coaches.  At this Deaflympics, Delvin Furlough, a 2009 graduate, tied with a 1974 graduate Suzy Barker’s most-medal record among the TSD athletes. They earned six medals.

ABOUT THE TEXAS SCHOOL FOR THE DEAF (TSD)

The Texas School for the Deaf is the oldest continuously operating public school in Texas. Educating deaf and hard of hearing students of Texas since 1856, the campus also provides outreach and educational resources for students, their families and professionals in the field throughout the state of Texas.  With educational excellence and a strong belief in a culture and community at TSD, students form a unique identity based on their individual strengths and talents. TSD is an environment where students learn, grow, and belong. For more information about the Texas School for the Deaf, visit http://www.tsd.state.tx.us/.