Texas School for the Deaf mourns the passing of Dr. Victor Henry Galloway 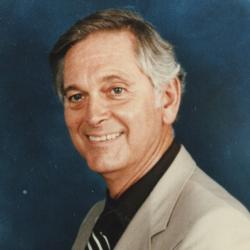 The Texas School for the Deaf (TSD) is deeply saddened, joining the Deaf and Hard of Hearing community, as we mourn the passing of a beloved former superintendent, friend and renowned leader in Deaf education, Dr. Victor Henry Galloway - TSD’s first Deaf Superintendent (1981-1986).
Dr. Galloway passed away peacefully in Austin Wednesday, January 16. After a long illness.
In addition to his numerous accomplishments still today affecting members of the Deaf community, Dr. Galloway played the role of Meryl Streep’s father in the movie “A River Wild” in 1994.
At ten months old, Galloway lost most of his hearing due to illness with a prolonged fever.
Following a successful career as a chemist at the U.S. Naval Ordnance Laboratory, and for Lockheed Aircraft Corporation, Galloway gave his heart, mind, and soul to the field of education so that other Deaf and Hard of Hearing individuals could succeed in any path or field.
Galloway went on to earn his master’s degree in Educational Administration and Supervision and Adult Education from California State University (Northridge) in 1966, and his doctorate from the University of Arizona in Educational Rehabilitation and Educational Administration in 1972, after completing his undergraduate work at Gallaudet University in Washington D.C., earning his Bachelor of Science degree in 1951. He attended South Carolina’s School for the Deaf and Blind and graduated from Spartanburg (South Carolina) High School in 1947.
Before his tenure at Texas School for the Deaf, Galloway served as the first Deaf superintendent of the Scranton State School for the Deaf in Pennsylvania (1979-1981), and he was the first Deaf educator in the College of Sciences in 1968 at Rochester Institute of Technology’s (RIT) National Institute for the Deaf (NTID) in New York.
While a member of the National Advisory Committee on Education of the Deaf, through the U.S. Department of Health, Education and Welfare, Galloway was instrumental in establishing the Model Secondary School for the Deaf (MSSD) at Gallaudet University, where he served until 1979.
Galloway brought passion and compassion when he came to lead the Texas School for the Deaf, expanding vocational programs so students developed job skills working in local businesses; he advanced TSD’s independent living and skills development programs for special needs students who are Deaf, and established partnerships that created education classes for Deaf adults at Austin Community College.
In 1982 Galloway’s vision brought today’s Total Communication philosophy to TSD, forming sign language programs for students and families, including bilingual sign language education for Texas’ Hispanic and Latino families.
A lover of sports, with a deep commitment to empowering Deaf and Hard of Hearing individuals to take pride in their differences, Dr. Galloway’s legacy remains a large part of TSD today.
TSD’s current superintendent Claire Bugen shared the news of Galloway’s death with campus staff, saying, “It is with a deep sense of personal loss that I share Vic's passing. His accomplishments are too numerous to name - his impact on the world, education, athletics and the arts - are almost without rival. I am who I am today largely a result of his mentoring and leadership. For those of us who were fortunate enough to love and be loved by this giant of a man with his debonair style, wit and intellect--the world is just a little more silent today.”
TSD shares it’s sorrow and deepest condolences with Mrs. Marilyn Galloway - Dr. Galloway’s devoted wife of 42 years, and daughter, Shayne Galloway, both of Austin. Mrs. Galloway continues her involvement at TSD, as director on the board of the Texas School for the Deaf Foundation.
Print