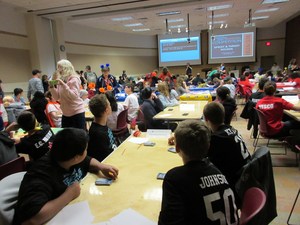 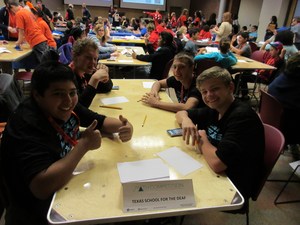 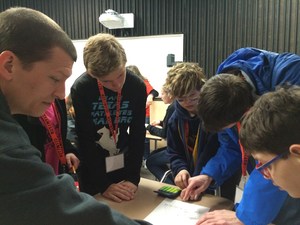 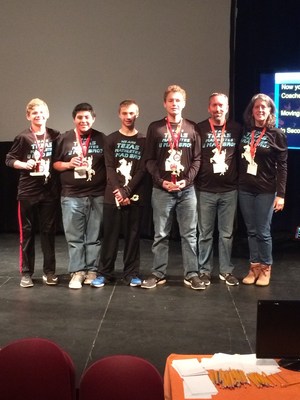 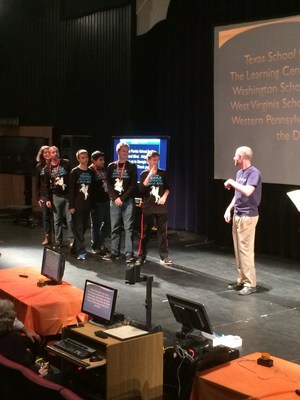 Texas School for the Deaf Middle School students Ethan Nunez, Taran Johson, Jack Scarboro, and Cage Hall were selected to attend the annual Math Competition for Deaf and Hard of Hearing students in Rochester NY at RIT/NTID.
Along with their Math Teachers/Coaches Dawn Kidd and Dana Stoddard they traveled from Austin to Rochester on Friday April 8, going through Washington DC to change planes.   The team and coaches arrived at the Radisson Hotel (very close to the RIT campus) and got settled.  Soon it was time to walk (in the cold!) to the Student Development Center on RIT campus.  There was a welcoming presentation by Michelle Gerson-Wagner, Assistant Director of NTID Pre-College Outreach, and then it was time to eat.  Dinner was pasta, salad, veggies, and cookies.  On to the competition!

At 6:45pm the competition started with the Team Problem Solving event.  Students in teams of 4 were given 10 problems to solve.  They could use calculators, plus they could discuss the problems with each other.  The students have to keep trying until they get all the problems correct, then they could leave the room.  Our team was on of 2 teams to leave the room first!  (The other was Greater Southern Tier BOCES).  Good start for the Rangers!  There is more competition this year - 34 schools are represented; that is 30 teams and a total of 120 students.  Walking back to the hotel there were a few snowballs thrown, and then it was time for fun playing in the hotel pool, then lights out!
Saturday morning up early again for breakfast at the SDC on RIT campus.  Over breakfast we reviewed math formulas and concepts.  Individual competition was made up of the Sprint Round (30 problems) and Target Round (2 rounds of 4 problems each for 12 minutes).

After the competition was the "Amazing Math Race."  Students were put into mixed groups and then had to solve problems in 4 different places in the LBJ building.  The problems consisted of Sudoku, Ken Ken, picture puzzles, etc, and there was a good bit of walking from place to place, so we got some good exercise too!  Several students received RIT backpacks and RIT Tiger Posters as prizes.  Lunch was sub sandwich box lunches with a huge delicious cookie for dessert.  After lunch we joined our group for a tour of the RIT campus.  We braved the cold and saw the dorms, gyms, student activity buildings, etc.

Next up - Individual Count Down.  The scores from the morning portions of the competition (Sprint and Target Rounds) decided which students would be included in the Individual Count Down.  Out of the top 14 students called to the stage (out of 120 students), all 4 of the TSD students were included - awesome!  3rd - Cage Hall, 5th - Jack Scarboro, 6th - Ethan Nuñez, 7th - Taran Johnson.  Then the head to head competition started - it was a 1:1 situation with 3 questions, then whoever got 2 out of 3 correct the most quickly would move on to the next bracket.  It was nerve wracking for students and their coaches too!  All students did well despite the pressure!

Additionally, the TSD Team won Honorable Mention for their school spirit and sportsmanship.  Several people commented how polite our students were and especially how they rooted for other teams and students.

As if the students had any energy left, after a pizza dinner everyone went to the Altitude Trampoline Park and jumped to their hearts content.  Well deserved fun after a hard day of thinking.

Sunday morning it was up very early (4:30am) to catch the tazxi to the airport for our flights home.  Through Chicago and then to Austin, all were glad to arrive home and be celebrated as the hard workers they are!  Congratulations to the 2016 TSD Middle School Mathletes!
Print