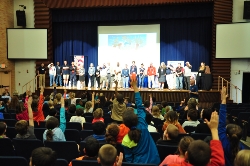 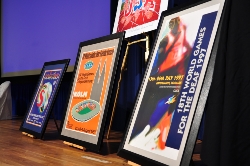 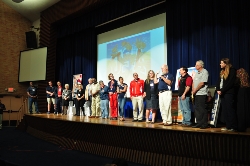 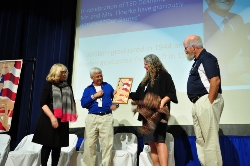 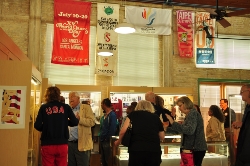 ON EXHIBIT THROUGH JUNE 6, TEXAS SCHOOL FOR THE DEAF SHOWCASES THE HISTORY OF TEXAS DEAFLYMPIANS FROM 1957- 2013
See the Photo Gallery Here
Austin, Texas – March 21, 2014 Former medalists, athletes and coaches who have attended the Deaflympic Games visit the Texas School for the Deaf (TSD) today for a celebration honoring Texans who have participated in the international Deaf games over the last 57 years.
The Deaflympics began in 1924.
The U.S. first competed at the Deaflympics in 1957, when the track and field team included three TSD staff members at the time: Raymond Butler - TSD’s Athletic Director, Ruth Seeger - TSD PE teacher, who was later the U.S.A. women’s track and field coach from 1965 to 1989, and Sammy Oates - a 1958 TSD graduate who holds sporting records at TSD, still today, in football and track and field events.
Since 1957 in Rome, TSD has had representatives at all summer Games, with Texans bringing home more than 100 medals over the years in a variety of sports.
“In fact," says TSD Athletic Director, Chris Hamilton, “we are proud that TSD boasts the most medals won by participants with ties to any U.S. school for students who are deaf and hard of hearing.”
Hamilton participated in two Deaflympics, in 2001 as a member of the U.S. handball team. And in 2009, he was the team’s head coach.
Most recently, 10 participants with ties to TSD attended the 2013 Deaflympic Games in Sophia Bulgaria, and brought more precious metal back to Texas than any other school for deaf students in America.
To further commemorate these Deaflympians, TSD’s exhibit at the school’s Heritage Center will be on display through June 6.
Open to the public, TSD proudly invites the community to visit its latest historical collection, “TSD at the Deaflympics”, featuring Deaflympic medals, pins, memorabilia, uniforms and banners - chronicling TSD members who have participated in the Deaflympic Games, from 1957 to 2013.
WHAT: Saluting Our Past Deaflympians
WHEN: Friday, March 21, 2014
9:00 am and 10:00 am - two assemblies
Welcome: Claire Bugen - Superintendent, TSD
Remarks: Jack Lamberton - President, U.S.A. Deaf Sports Federation (USADSF)
Dr. Bobbie Beth Scoggins - TSD Class of 1973, Two-time Deaflympian, First President of the USADSF, First female torchbearer for the International Olympic Games in 2004
Franna Camenisch - TSD Class of 1965, Curator-TSD Heritage Center Museum
Presentation of Texas’ Deaflympians
11:00 am Museum exhibit tour: “TSD at the Deaflympics”
WHERE: R.L. Davis Auditorium and Heritage Center
Texas School for the Deaf
1102 South Congress Avenue
Austin, Texas 78704

MORE: Voice interpreters will be provided.
Assemblies followed by a guided tour of the TSD Heritage Center’s exhibit: “TSD at the Deaflympics” - on display and open to the public through June 6 - a comprehensive and fascinating collection chronicling the history of Texans participating in the Deaflympic Games, from 1957 through 2013. To schedule a museum tour, please contact by email: heritage.center@tsd.state.tx.us.
Print