Texas School for the Deaf Students Present: Charlie and the Chocolate Factory in ASL 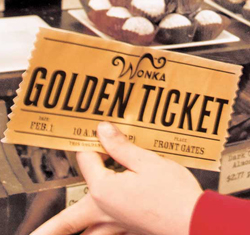 Texas School for the Deaf (TSD) is proud to present its spring student drama - Charlie and the Chocolate Factory, 7:00 p.m., Friday and Saturday, April 12-13, at the school’s R. L. Davis Auditorium – 1102 South Congress Avenue.
“…We are the dreamers of dreams!”

The story focuses on Charlie Bucket - played by freshman, Ben Beyer, a poor boy with a big heart whose far-fetched dreams become reality when he wins one of only five golden tickets for a tour of the wondrous Wonka Chocolate Factory.

Senior, Trevor Anderson - who plays the eccentric, quirky Wonka, has served as a leader of the production, and role model, by making sure the cast members all work together as a team.

“We rely on [Trevor] for his energy. He’s really set the tone for everyone,” says production co-director and TSD middle school English/Language Arts/Theater teacher, Gabrielle Nocciolino.

“The cast members have undergone a tremendous journey throughout the rehearsal process, Nocciolino continues. From translating the script from English to American Sign Language, to bringing their characters to life, we now function as a family, both on and off stage.”

The vibrant and inspirational show – all performed by TSD students in American Sign Language – is guaranteed to be chock-full of laughter, dancing, and jokes – and promises to capture the audience’s hearts and bring out their youthfulness.

“The story should give people faith to do what they want to do by showing that anything special can happen to anyone,” says Beyer.

Nocciolino feels TSD’s rendition of Charlie will provide an encouraging message to the audience to “create, invent, and dream.”