Welcome to the 2013 Willigan Tournament! 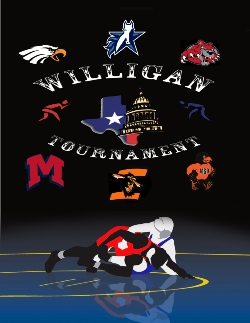 Bringing the excitement to Austin, the Texas School for the Deaf (TSD) takes its turn as host, welcoming athletes today for the 9th annual Willigan Wrestling Tournament – a national competition among Deaf high school students, formerly named the National Deaf Prep Wrestling Tournament. This sporting event will be celebrated at TSD from January 25-26, 2013.
Just renamed in 2012 to honor the great Marty Willigan who had a had a long, successful career in wrestling, the 2013 tournament features two days of competition in Austin for athletes from six schools for the Deaf in California - from both Riverside and Fremont campuses, Indiana, Maryland, the Model Secondary School in Washington, D.C., and Texas.
Willigan made the NCAA finals in 1968. And, undefeated in 1969, he placed second with his only loss in the final match against the legendary, Dan Gable. Willigan was also selected for the USA Wresting Team, winning gold at the World Games for the Deaf in 1969, and again in 1973.
Willigan later coached at Gallaudet University in Washington D.C., where he produced four NCAA All-American wrestling athletes, and took 11th place at the Division III championships in 1990. Willigan led American wrestling teams at the World Games for the Deaf in 1977, ’81, ’85 and ’93, and he coached the Canadian national team in 1989.
TSD’s Athletic Director, Chris Hamilton, says “it is definitely an exciting moment for TSD wrestlers to have the opportunity to compete against others who are deaf and hard of hearing once a year.”
Competing in Texas’ TAPPS II division, TSD’s competitors are usually among hearing students from central Texas’ private and parochial schools.
Admission fees:
Adults -- $6/Single Day; $8/Combo
Students/Sr. Citizens -- $4/Single Day; $6/Combo
Children 5 and under -- FREE
To visit the Tournament's website click here: www.tsd.state.tx.us/willigan2013
Published January 23, 2013 Print