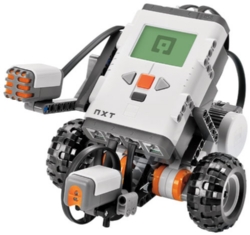 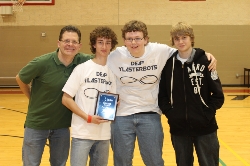 Competing for the first time, Texas School for the Deaf (TSD) scores high to win the Regional Robotics Competition, advancing to the state finals
Practice makes perfect!
On Jan 12, 2013 in New Braunfels Texas, a TSD team, for the first time ever, entered the 10th annual Texas Computers Education Association’s (TCEA) regional Robotics Competition.
Among 26 Texas high school teams, our very own TSD Rangers took first place!
Starting with arena competitions at 2 minutes each, judges tallied scores for each team at the end of 3 rounds.
During the Pit Stop, teams then went to work to build and program their LEGO NXT robots to successfully collect as many red and black checkers as possible, and two challenge pieces from the feeder areas on the competition mat. All pieces must be moved by the team’s robot to five small, target areas in less than 2 minutes for a perfect, maximum score of 400 points.
After three rounds, all competing teams averaged 180 to 200 points.
With friends and family cheering them on, TSD scored 140, 250, and 180 on the three rounds, averaging to a final score of 215, placing TSD at the top.
TSD is now qualified for the state competition in April, and celebrated their regional championship together with dinner afterwards.
The team sends a special thanks to Dan Guerra and his cabinet and woodworking classes at TSD for building a practice competition platform for the Robotics team to use and develop strategies for the competition.
TSD’s next stop will be the state competition at Deer Park High School in Houston, where the competition gets serious with over 60 Texas high schools from all across the state of Texas.
Congratulations to Team TSD: Reno, Lee, Scott, Braden, and robotics teacher/sponsor, Paul Stropko.
“Give them all a Ranger High Five when you see them at TSD! They did a phenomenal job, Stropko said. By working so well together, they made it to the top at the regional championship where they competed for the first time ever. We are pumped and ready for state.”
The team will go back to work and practice to make the robotics’ routes perfect for the state competition on April 13th. Go Rangers!
Print