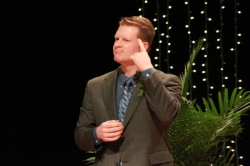 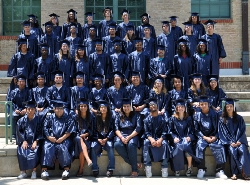 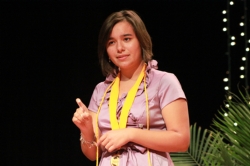 The Class of 2011 celebrated commencement under typical scorching summer skies on a day that seemed perfect to begin a new chapter in their lives.
By Claire Bugen
The Class of 2011 celebrated commencement under typical scorching summer skies on a day that seemed perfect to begin a new chapter in their lives.
The festivities began with the Senior-Parent buffet where each graduate received recognition from his or her legislator including some historic memorabilia and an occasional personal appearance.  Parents, seniors and their families thrilled to the traditional Senior Video montage, a gift prepared for seniors by TSD that documents their senior year.  As is typical of this presentation, there is rarely a dry eye in the house.  As a post-script to this we had a group of students do the TSD version of a “flash mob” accompanied by Beyonce’s “Move Your Body”.
Our ceremonies opened with a stunning ASL performance of the National Anthem followed by the Class of 2023 (recent Kindergarten graduates) presenting the TSD School Song.
Our Superintendent then addressed the graduates, families and staff and reminded them to continue dreaming big.  She described the class as dreamers and doers and she encouraged them all to become dreamers who do!
Our Salutatorian, Ashlee Lambert, addressed her classmates and asked them to believe in themselves and to make a difference.  Her speech was followed by a live signed and dance performance of Kelly Clarkson’s song “Thankful”.  Valedictorian Christian Escamilla described her classmates as U.N.I.Q.U.E.  (U meaning each of you, N-notable, I—inexplicable, Q—quirky, U-unusual, and last E—exceptional.  She closed her speech with a challenge to remember the word, UNIQUE.  “We are one all together…but each in unique ways.” TSD is indeed a unique school providing its students unique opportunities.
Commencement speaker, Dr. Chris Moreland, with a tough act to follow, did just that.  He inspired our students to set their goals high and work hard to achieve them—a message he knows first hand as a Deaf physician with a distinguished career in internal medicine and teaching at the UT Health Science Center in San Antonio.
In a tribute like no other, Valedictorian Christian Escamilla presented a student directed, edited and produced music video both pre-recorded and live titled “Firework” by Katy Perry to an adoring audience of fans.  Christian brought the house down as she belted out in sign “Baby you’re a firework, come on let your colors burst…”
And so it goes—the end of one journey, the commencing of another, the sending off of young people, young men and women filled with wisdom and formed in a community filled with love.
Published March 1, 2012