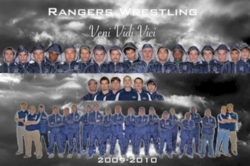 The Rangers Wrestling team went to Maryland School for the Deaf for the 6th National Deaf Wrestling Duals. The Rangers had a great weekend placing 2nd.
Our boys fought hard through and through until the very end! Our Rangers team defeated everyone including the champions MSD which brought our season’s total to 14 - 2.
TSD swept the round robin format 6-0 and collected the #1 seeding for the bracket portion of the tournament. First round was a bye for us. We then played against CSDF in the semifinals in which we easily beat them then proceeded to the championship match against MSD. The match against MSD was surely an exciting one; however, we lost 34 to 44 to a very smart and hungry team.
Orren Aden won a pin for the quickest pin award (11 seconds) and Cameron Luke won for the most single match points (23).
They picked best wrestlers for each weight classes: four of our boys won - Derrick Gamble 103lbs, Ivan Felipe 135lbs, Orren Aden 145lbs, Adrian Barajas 152lbs. Do take a moment to congratulate the winners and each member of the team for a job well done at the tournament.
Our season is not over as we will be hosting the TAPPS State wrestling tournament here at TSD!
Print