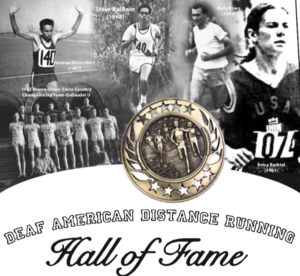 Austin, Texas – May 2, 2019 – Today the Deaf American Distance Runners Hall of Fame host its’ first induction ceremony at 2:30 p.m. at the Texas School for the Deaf’s Seeger Gym, located at 1102 South Congress Avenue in Austin.

When long-distance runner himself, Dr. Steve Baldwin, of Austin, found as far back as 1937 there had been a lack of recognition for American deaf distance runners, the Deaf Distance Runners Hall of Fame was established in 2018.

Baldwin discovered due to different criteria, only one distance runner had been included in all of USA Deaf Sports Federation’s halls of fame out of 97 famous athletes, coaches, and writers, and only four distance runners were recognized in the USA Deaf Track and Field’s hall of fame.

Thanks to careful records from the extant Mason-Dixon Conference from 1936 to 1986 kept by USA Track and Field Hall of Famer, Dr. Frank Zarnowski, today 25 inductees are being honored, including coaches, writers, and historians from the 1950s-1990s.

Ammons is a renowned deaf educator, author, two-time sports Hall of Famer and former President of the Comite International des Sports des Sourds who served as the USA Deaflympics chairperson (2003-2009)